NeQuasia has caused quite a stir on the independent scene.

And after today's interview on The Daily Talk, she's set the bar at WVMR, as she's official has been interviewed on 7 different shows on the independent radio station! Including shutting down Blackthorn 51 this past Sunday, the young vocalist continues her momentum into 2017 with a unique contest!

You record your best 16 or 32 to the instrumental to NeQuasia's hit song "Hella Bent", upload it and then sent it in to WVMR for submission to: WVMRBookings@gmail.com! 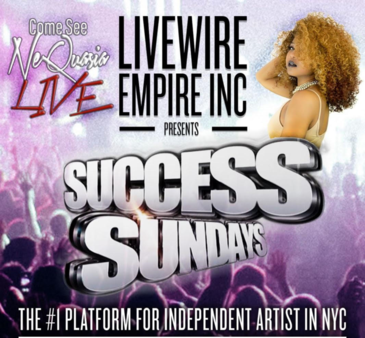 And with her big show coming up for Success Sundays at SOBs on March 12th, we're giving you until THIS FRIDAY March 10th to submit and March 11th to announce the winner!

And the winner gets:
- Added to the official remix of "Hella Bent"
- An interview on The Daily Talk w/ NeQuasia
- One full weekend (March 18th & 19th) of YOUR music played on WVMR [12:01am Saturday to 11:59pm Sunday]
- A full 10 minute set at Voicelesspalooza on July 22nd, live from Dutch Kills Playground in Queens, NY