Keep Your Team Off The Fuckin Stage! 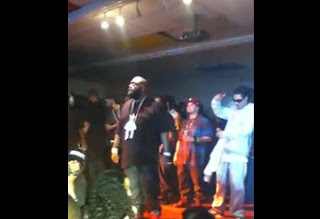 Yeah that's right, you heard me! One of the most unprofessional things to witness at a showcase is seeing numerous people on stage doing a whole lot of nothing. I hate to always come at rappers but there's a lot that some rappers need to work on in order to be taken seriously in this industry. This doesn't really go out to R&B singers because they bring a different element to their performance and artistry.

Now back to you rappers... You have a hype man? That's cool. You have a few of your team that spit with you? Great! You're collaborating with someone or a few people? Dope! You're the only one rappin and all of your team is on stage with you? #fail #dub. There's two reasons why this isn't a good look. The first reason is the aesthetic of it all. Seeing one person trying his hardest to be seen rocking the mic while his whole team takes up space on the stage forcing him to only be able to move in a 360 box is not a good look at all.

Now the second and most important for you the artist is that you're team is taking away the crowd being able to feel your music. If all the energy is on stage then where does that leave the crowd exactly. Some people will still turn up with you but overall they're hurting your chances of reaching the audience. Here's a suggestion...

Spread your team out throughout the entire venue. You know, five people on this side, four people in the middle etc. When it's time for your performance have them turn up like they normally would but now because differe t sections of the crowd is feeling your music the rest of the audience will usually follow suit.  Feeling left out, a hater or lame is the end result to someone seeing how lit the crowd is and how "unlit" they are. I've been in that situation myself a few times where I've started dancing and feeling a person's music because of the impact that he/she had on the audience and not so much their music. Keeping them off the stage will do your performance good in the long run trust me.