Check Me When You See Me (Death To Twitter Fingers)

Posted by Blackout The Rebel on September 20, 2017 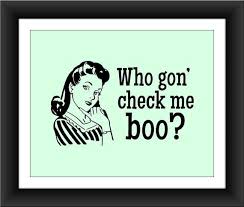 This has by far been the most sensitive ass, softest, emotional ass summer I've seen in years (And to think Drake wasn't even responsible for any of it this time). This "Indiestry" really is something else I swear. You might be asking yourself what I am referring to you and I'm going to explain that right now.

This "Indiestry" is small so word travels quickly about most things. With that being said it makes sense to deal with problems as the arise head on rather than talking to other people besides the person(s) you have the actual problem with. This only invites more problems because instead of having a problem with that one person or couple of people you now have to also accept the fact that more people than the person/people you told about this issue may know about it. So there you have it.... what was once a private issue with one or more parties has now become public business. You're mad that people can't be trusted and this "indiestry" is so small that everyone is up in your business but really the main person you should be mad at is yourself.

Why is it that when a problem or issue happens some people rather gossip, talk shit, run their mouths to their friends and send indirect shots and subliminals than deal with the actual person they have the issue with? When has it become cool to not address problems with people and just sub people on social media about it. Then when asked about it by that person or party they act like everything is okay.

See... I'm an 80's baby and my generation has this motto that goes "check me when you see me". This means that if I have wronged you in any way then the next time you saw me you pulled me aside and checked me about it or if I happen to wrong you while I'm in your presence then you're next action is to immediately pull me aside and yep you guessed it... check me about it. You don't wait till the next couple of times to say something to me about it after you already sent subliminal shots at me via Facebook for the past couple of days. No, you checked me immediately as it happened.

I don't know who made it cool to have these itchy Twitter fingers but the shit needs to stop now! I'm not built for these little kid antics and I will address any problem head on right then and there. Regardless if I'm right or wrong I won't let time or outside influence alter or become privy to my matters.

Not to be sexist or anything but another reason why I'm not for all of this gossip and stuff is because I'm a man. Men were never the ones who would run their mouths and gossip, It was more so of a female thing but see here's the tricky part you ready? I make posts all the time that are INSPIRED (keyword here) by people and events I have witnessed. I write about them to bring awareness, insight and information as what to do and not do in this industry. Some people feel a way about the things I say but rather than speak to me personally they will run their mouths to their friends, family, GF/BF whatever. I could really care less because Its not like these are personal matters that I am broadcasting, these are public and out in the open situations and topics I choose to discuss. The minute someone feels a way about the things I post and say you know where to find me and if you don't I am a DM away.

Now I am happy to say that usually I don't have to deal with any of this directly because as much shit as I talk I do have a certain level of respect for everyone who is pushing towards their dreams and goals in this industry however, When I have friends that make it their business to tell me about their issues instead of dealing with it themselves it grinds my fuckin' gears! Don't come at me all hot telling me about a situation that happened with somebody and mums the word when you see that person or you never hit them up about it. Its a waste of my time and its really a waste of your own time.

If you wanna be the bigger person and not entertain it that's great but if you wish to engage in this situation than do it the proper way please. Deal with the person or people directly and do it BEFORE you start popping shit about it online to me or in your posts. Don't let time go by either because it just leaves too much room for that person to run their mouth about it making you look like the bad person and it also looks like you had to speak to people to get you hyped and backed up about it which makes you look soft.

Let the records be clear about something before I leave you. I am not a fan of violence I am simply a fan of people being honest and addressing issues as they happen. This doesn't necessarily have to result in a violent altercation it just means that the issue at hand is being discussed and handled as appropriately as you both agreed could possibly be managed.