Stop Giving Yourself Titles You Didn't Work For 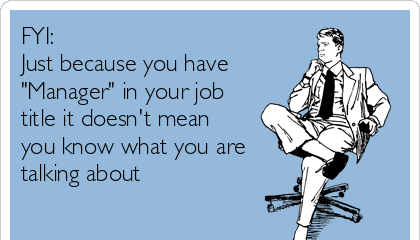 The way this "Indiestry" is set up it will give you endless things to talk about and laugh at. One thing I find most fascinating is how people ever so quickly assign themselves titles that they hardly put any real man hours or effort for. Even worse than that I see/hear people creating titles now too. Once again its left to me to break down in detail what I'm talking about and also why this is slightly disrespectful.

"I am a graphic designer" vs "I do a little graphic work on the side". Do you see the difference here? No? Well allow me to explain. Saying you are a graphic designer states that this is what you do and what you're known for and what you're good at. Stating that you do a little graphic work is basically saying that you're somewhat of novice or intermediate level in this field. It lets the person you're talking to know that they're not gonna receive George Lucas graphics or anything but at the very least it will be clean and tasteful.

Giving yourself a title you didn't work for makes you look bad when its time to show and prove. If you can't prove that whatever title you have was earned then you have a huge problem on your hands. Unfortunately there's "graphic designers" I know that will give you a finish product that looks like some shit out of Mario Paint (only my 80's babies know about that game). I've also seen some managers unable to manage their artist to the point where they don't even know where to find their music. Word travels fast around these parts and the last thing you want is for a pissed off artist or client fuming about your inexperience because you put on such a good front that you knew everything.

Aside from living up to your titles I'm also seeing as lot of people creating and inventing titles up as well. I mean whatever floats your boat I guess but just make sure you can not only explain what the fuck it is but also carry out whatever it entails as well. I mean I guess you can carry it out since you thought it up right. I could have sworn I heard that someone is a Social Media Activist which kinda confuses me like are you only an activist when you're on social media? How does one become a Social Media Activist? Is this a real thing or did you just get hyped that your tweet got a lot of love and feedback during one of your rants for "Black Twitter"?

When people start asking questions like these about what it is that you do it might possibly mean that they just simply don't know anything about your profession and you have to school them a little OR you could just be full of shit. In any case choose your title wisely because end of the day its a slap in the face of those who take what they do seriously and also you don't wanna RUN the risk of looking like an idiot in front of people.