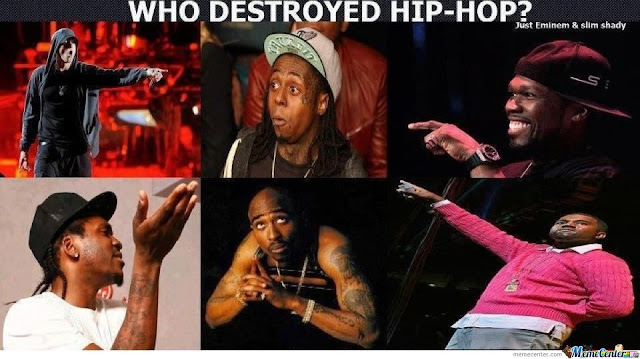 What started as a funny meme and running joke actually has a little bit of truth behind it. Recently on a Hot 97 interview with Fat Joe he explains that a lot of the new music that we've been listening to from artist like Lil Uzi Vert, Young Thug and etc has been due to Lil Wayne and not just any Lil Wayne either. I'm referring to Weezy when he was in his Rockstar "I Am Not A Human" phase. Yes, All of the lean sippin' and skateboard attire contributed to a lot of the new artist that are all over the radio waves today.

Their whole thought process is that they want to be referred to as Rock stars as opposed to Hip-Hop artist. The reason being I can imagine is so that they won't have to deal with the responsibilities that may entail like freestyling, constructing actual songs with verses, hooks and bridges etc. What they fail to realize is that Weezy didn't just jump out the gate with this Rock persona. In the beginning he was known to the world as Lil Wayne... A member from Cash Money Millionaires who later on ventured out on his own as a solo artist. Throughout that entire time he was actually spitting bars. By the time he came out with his Jeggins and Trukfit he was already out for more than 8 years. Had he came out from the beginning with no cosign or anything dressing and making rock music he would have dealt with the same type of issues that these new artist are dealing with.

This is all speculation though and I would love to hear your thoughts on this subject matter. How much responsibility do you think Weezy really holds for the new generation of Hip-Hop? Do you think Weezy would have caught any of the backlash that these new rappers today are catching if he came out as a rockstar and not a rapper?

Let us know in the comments section.