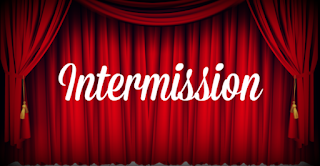 Intermissions... A good thought in theory but not something I would recommend. An intermission is used for an audience to use the restrooms, Go get refreshments and network with people in the venue or just simply chill out until the rest of the show returns. The problem with doing this that I've noticed is that it messes with the fluidity of the show. Let's be real here... When dealing with showcases and open mics it's very rare that these events start on time so already the patience of the audience and performers is tested because they're anxious for the show to begin. Now that the show is finally going on the last thing you wanna think to do is throw an intermission into it.

I'v also noticed that intermissions take longer then they say they usually do so when you think about that it now makes the overall show even longer. Imagine being an artist waiting to perform and you're tired of waiting and you find out there's going to be an intermission to make you wait to perform even longer. Better yet... Imagine you are a friend of someone performing so you already probably didn't want to be there to begin with but to show love for your homie you decided to come out. Its been hours from the time you got there till now due to the event starting late and the fact that he/she hasn't performed yet and you now hear "Intermission".

I've seen this happen a lot and it's never good for the artist because sometimes what will happen is that your friends/family might get too tired of waiting and leave so there goes your cheering section. What also happens is that if you're an artist or a friend one that has already performed this is the perfect opportune time to leave out seamlessly. That's great for you or your friend that performed but what about the artist that didn't perform yet? Guess who's now performing for a vastly smaller audience?

People think Intermissions are a good idea but I for one don't agree. I say keep the show rolling no matter what
#Intermission #showcase #showcases #openmics #artist #perform #performances