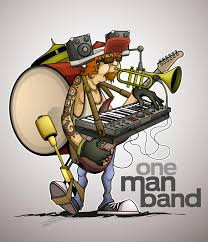 Recently I had to let my Co-Hosts go due to financial reasons. Since then I have been thinking to myself the advantages of being able to conduct a show alone and here's what I have realized...
When you are the only host you have full authority of how to manage and control the conversation. Sometimes when there's more than one voice the topic gets derailed and if you're not experienced enough it becomes hard to get the convo back on track. You also don't have to worry about being cut off anymore unless its by the guest which rarely happens depending on who you're interviewing. Everyone is so excited to get their points across which is great but sometimes in doing so you end up talking over someone and either their point or yours isn't heard in full.

Research is very key in this business and when you don't do enough or the right research it shows. When listening/watching a show it won't take long to figure out who has done their homework and who is just cosigning to the things that's said. Having weak links like that can discredit your shows merit.

Another thing that can become annoying and just downright disrespectful is showing up late or not at all. There's nothing worse than having a great conversation with your guest(s) and its suddenly interrupted because someone has just walked in and needs to get themselves settled. Visually it looks bad when watching it but its even worse when listening because you can't see what's happening. All you know is that one minute everything is fine and the next you hear a new voice and shuffling around as someone tries to make themselves comfortable. Even worse then that is when there is no type of heads up whatsoever so you are stuck covering for your co-host(s) which isn't fair at all.

Last but not least is fiances. It costs money to keep a showing going and if your co-host(s) can't pull their weight then they need to go period. Its better to struggle by yourself then to do it with people right next to you who won't even bother to help.

In closing, Being on your own isn't always a bad thing. One must master or already know how to keep a conversation flowing, research your guest to better tailor your questions and of course be on time and on top of your expenses.