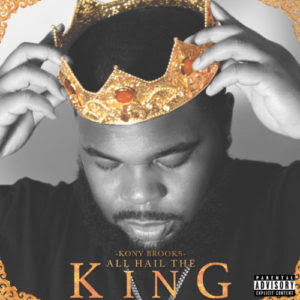 Kony Brooks has earned the name king for several reasons. From being a freestyle titan on several radio shows and cyphers, to being crowned Mr. Voiceless Music one year ago, it makes sense why his latest project is titled All Hail The King.

With the hit songs "Waist Trainer" and "Rough" featuring Mickey Factz already certified bangers, we had to expect much of the same. And we we're not disappointed.

Impressed by his already powerful lyricism in freestyles stretched from WVMR New York to Shade 45, The King delivers with overall solid content. One of the breakout tracks, which we co-sign as the next single has to be "Catch This Vibe" that has a rare mainstream sound with songs that hit better than your current radio hits.

But for a personal level, "Indiestry Freak" is the surprising favorite. From B. Live to NeQuasia, Kony trended this 2018 How To Rob to subsequently one of the most catchy tracks on the underground scene today.

If you haven't already, check out All Hail The King on all streaming platforms below and purchase today.