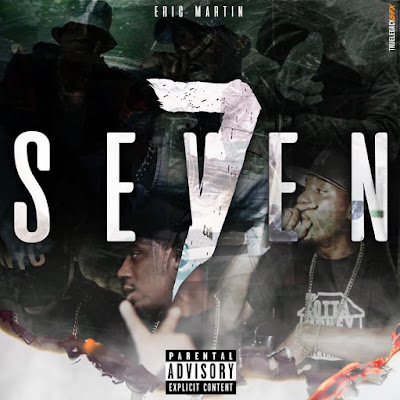 Sometimes it takes some time to rebrand and refocus. But it takes even more patience before revealing said rebrand, hence why I was a big supporter of today's feature Eric Martin, and his new lease on music.

He's always been a spitter. Always one of Brooklyn's underrated. BUT, one of the deadliest punchline artists I've ever met. Seven puts all of that together.

I'll say off the bat, "Intro to Seven" sounds like Jay himself gave him the blueprint (literally) on how to speak your truth on an opener for an album. 'Nuff said.

The iTunes favourite (since I have this lovely Apple Music subscription) "Living Dream" is a great example of what I mentioned. Martin will give you that radio-friendly vibe where he's saying some shit that will give you that 'damn, he's right' reaction. It's a great kick-off to the project.

However, my two favourites are, to me, the strongest tracks on here.

First, "187" which I had the pleasure to hear months before the project dropped which I told Eric should be the lead single and needs a visual. I've been saying niggas with that 'breastfed energy' for a minute now... it's good now someone put it in a fire track for y'all to understand.

Second, "Goosebumps". Yeah, it's a 'girly' track. But its a relatable one. Fellas, call her back. Like seriously, if this track don't hit you like you f'ed up and in your feelings a bit, then you aint listening clear enough. And any track that can make me reminisce with a little Donnell Jones in there is a keeper in my book.

Voiceless Music comes back. Eric Martin comes back. Seems like a match made in heaven to me. This was the perfect project needed to review. Y'all need to feel this one.