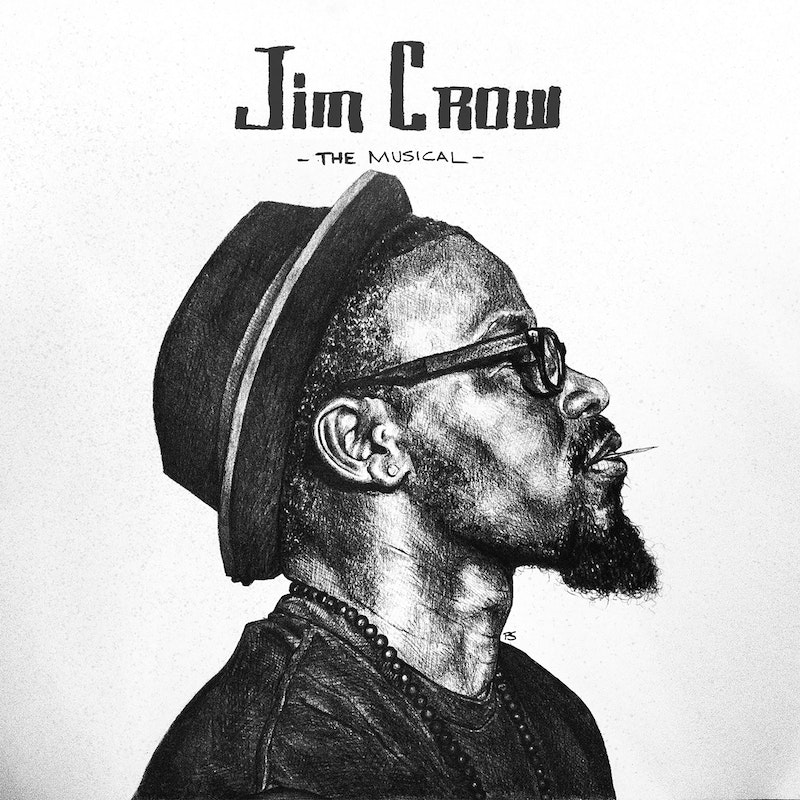 Usually, I know exactly where to start whenever I say about an album that I’ve listened to. I usually get a good grasp on what my first initial thoughts are upon first listen and I discuss accordingly. However, this album has left me almost dumbfounded as to what to say. There’s so much I want to say about it but there’s so much to unpack. I guess a little bit of context may help.

Add-2 is a rapper out of Chicago that I found through the YouTube channel Dead End Hip Hop. I used their channel as a way to discover more music and Add-2’s Prey for the Poor was mentioned. It was one of my favorite projects in 2015 and I was thoroughly blown away by just how great the social commentary was in his lyrics and packaging it into great music. Prey for the Poor remained in my personal rotation for years to come with no word on when I could expect his next body of work.

Fast forward roughly 4 years later, I see Add-2 announce “Jim Crow the Musical” would be soon released to the public. Admittedly, I didn’t think it was an album, I thought he was transitioning into live theatre performances. As a fan, I was met with mixed feelings. Initially, I selfishly just wanted new music to consume. I thought that a lot of time had passed and would expect some new music in some sort of streaming format. But I was also proud that someone I was a fan of got an opportunity to do something incredibly ambitious and wished for the best. Next thing you know, he released the whole album in its entirety.
Jim Crow the Musical is an incredibly loaded album to digest. My instant thoughts was that I’m glad he spent the time away to create an album that might just be my favorite I’ve heard this year. Just on the surface, the production and mixing is top-notch that creates such a vivid soundscape. Songs like Nappy Hair and Jump The Broom remind me of early Common records. They carry this atmosphere of love that is so reminiscent of the Love Jones movie. Willie Gets Lynched, on the other hand, carries such a haunting, terrifying feel through the somber piano chords and the melancholic horns. It captures hopelessness and fear in ways that I haven’t heard in ages. Records such as Maintain and 3 Fifs are so cinematic in its production that I found myself entranced by the album and clamoring to see the rest of the album’s direction. Altogether, Jim Crow the Musical is an album that is rich with soul and heart in its gorgeous instrumentation. I think the album attempted to capture what it is to be Black in America and it does so with so much care. It also encapsulates its environment not only through the music but through the album’s skits. Many times, skits tend to be completely unnecessary to what the project is attempting to be conveyed or is some sort of diversion that steers away from the flow of an album. However, On Jim Crow the Musical, the skits theatrically approach the albums various themes with tact and thoughtfulness that add to the overall album experience. Where this album excels is in Add-2’s powerful songwriting.

On “Jim Crow the Musical”, I’ve found countless lines circling in my mind that leave me speechless. I think the lines that really captured the entire experience was “My family tree was uprooted by Uncle Sam” and “When you Black, you don’t live, you just learn to survive.” Lines like these capture so much pain, frustration and sadness that comes living as a Black man or woman that people will not fully comprehend unless they’ve lived it or seen it. Another awe-inspiring example of the writing on this album is the first verse on “Willie Gets Lynched”. Rapping from the perspective of a Black man who is hung by the end of the verse. It takes an incredible will and ability to approach such a point of view, capturing those last moments that Black men and women had to deal with during the heart of slavery and the Jim Crow era. The parallels standstill today which speaks to how little progress we’ve really made in today’s America loaded with covert and overt racism. Add-2 brings a mix of skillful metaphors and punchlines and emotionally potent lines packed with strong social commentary.

I think the best way I could describe “Jim Crow the Musical” is powerful. The themes and topics are touching and poignant. The album balances pain and beauty in a stunningly marvellous manner. Selfishly, I wanted music sooner than later after I heard Prey for the Poor in 2015 but I couldn’t be more thankful that he took his time with it. It could easily be a late entrant into the top spot for my personal album of the year. All I could ask for now is for “Jim Crow the Musical” to be shown on the big stage as a real musical.