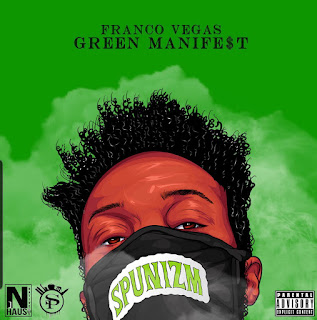 Hope everyone is healthy and maintaining in these trying times. It's in moments like these where the need for art is at an all time high to aid us in the escapism we need from the cruel world. Franco Vegas does just that with his new EP "Green Manifest". For all of you out there who partake in "greenery" this is right up your alley and for those of you who don't do not feel like you won't be able to enjoy it all the same. The project has vibes that will ease you as you decompress from the stresses of the day. With all that said let's see what's really underneath the hood of these songs shall we?

The intro kicks off with "4:20 Skit" which is Franco checking his messages to realize that he is late for his wake and bake with his friends because its 4/20. For those of you who do not know or think they know but actually don't "4/20" was first coined back in 1971 by The Waldos. Who are they you might be asking, Well they are a group of friends comprised of Steve Capper, Dave Reddix, Jeffrey Noel, Larry Schwartz, and Mark Gravich who sat out to uncover an abandoned cannabis crop. The group would convene at the Louis Pasteur statue in front of their highschool and the time for their meetup would be you guessed it 4:20. Although it was created in 1971 it didn't take the form of what it is today until May of 1991 when Steve Hager of High Times Magazine included them in that months issue. Anyways... lets move on to the next track.

"Slide has that smooth laid back vibe that I was briefly explaining in the previous paragraph. What sticks out to me was when Franco was saying how he isn't going to sell his soul for anything which is unfortunately quite the opposite when dealing with the entertainment industry. Next we have "Dreams" which has a slightly more aggressive approach to the track with its east coast sound. The wordplay strings together the concept of the song nicely while the hook touches on being rich and reaching your goals which we all can relate to in one way or another.

Now "Blazer" has a little bit more energy while still coming off as relaxed and smooth as it is the last song on the project. It's one of those you have to hear it to see what I mean. The outro comes back to Franco getting messages before he spits one last 16 to leave out on a good note so if you're looking for chilled/good music than you need to give this project a listen and let us know what you think. 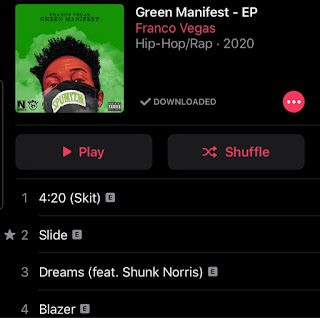