Posted by Blackout The Rebel on August 27, 2020
If something randomly happens its easy to write it off as a coincidence. Now if that same thing happens twice its unlikely however possible and probable but if we take that same exact thing and have it happen for a third time then its officially done deliberately. You may be asking yourself where am I going with this. Well, I would like to touch on the fact that even though bridges have been rebuilt and friendships have been mended it seems like Jay-Z just cannot let the past go.
For those who are too young or unfamiliar with the beef that transpired in the early 2000s between Nas and Jay-Z it took the Hip-Hop community by storm and divided us right down the middle. I vividly remember my classmates articulating who's side they were on and why. Its this discussion that I believe made me a fan of the radio and TV personalities that had to dissect this and other topics that was music related. There was a time where the only two songs you probably heard from someone's car was "Takeover" or "Ether". As time passes and men mature the hatchet was buried and they became friends again doing songs with one another and just plain hanging out and getting money together.
One would think that everything is cool right? It does make sense to think that until you look at the pattern that has developed since late 2001. The following picture says it all. 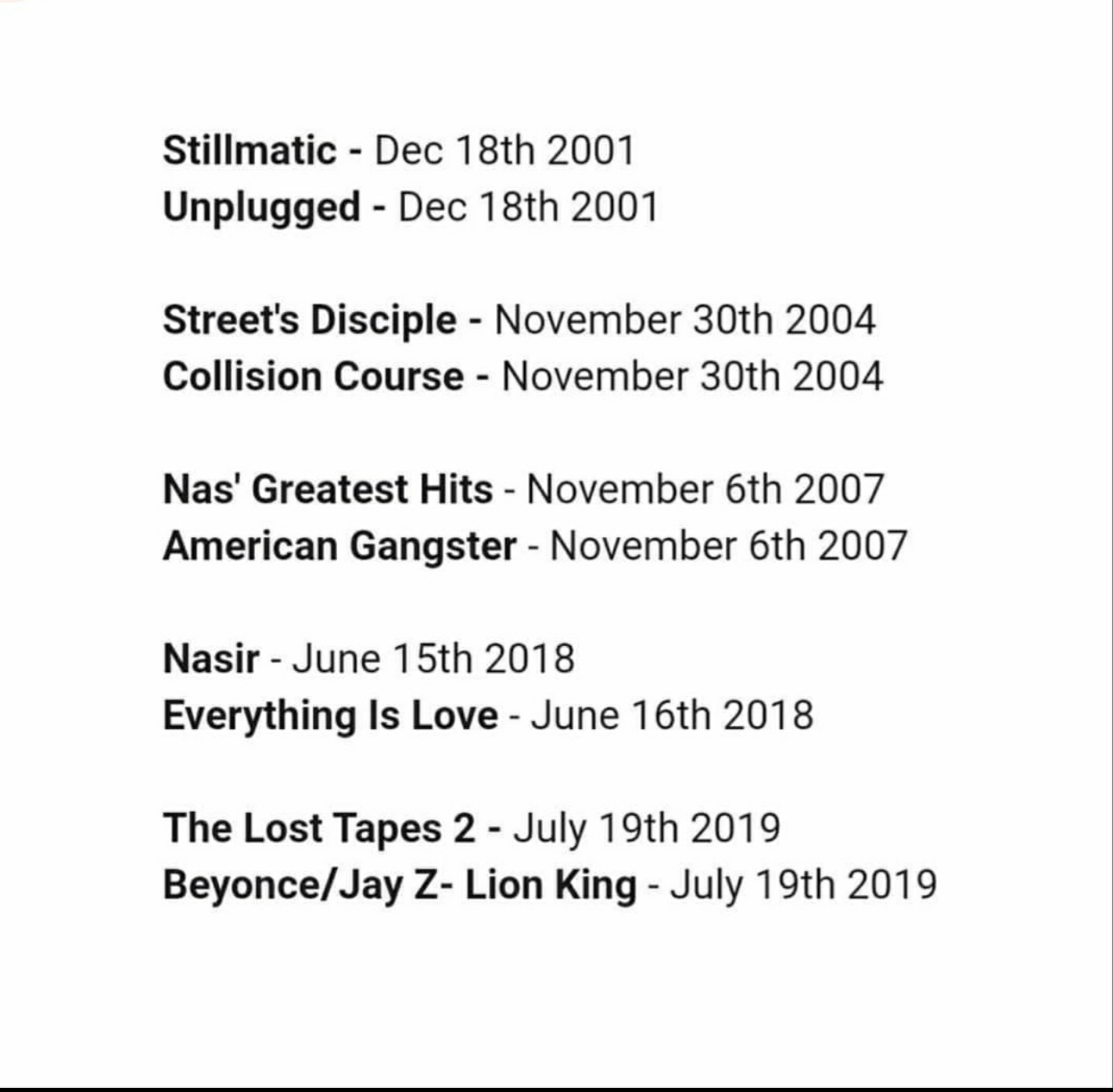 The pattern as you can see is clear as day. Its not a day or two off. Its the exact same day for almost 20 years now. Its not included in this picture but this occurrence has continued till this very day with Nas' newest project Kings Disease and Jay's newest track "Black Entrepreneur". Its really hard to not that think that Jay wants to steal the spotlight from. Nas especially with the type of record that it is. "Black Entrepreneur" is very pro-black and positive however he's a little late because Nas dropped "Ultra Black" the week prior. When asked about this occurrence Nas for one wasn't aware of it and also feels like its more "synergy" than anything else. He than goes on to say that this question would better be answered by Jay and not him to which he makes a very good point but I am a little doubtful that anyone would approach him with this question because of where he's at career wise. Courtesy of The Breakfast Club I have footage of that portion of the interview below.
How do you feel about this? Do you think Jay has Strategically been trolling Nas in order to steal his shine? Or do you think these are "random" occurrences? Do you think Jay is over what happened in the past? Would you do this to someone who you consider a friend?