The Voiceless Music Op Ed: What Does It Take? 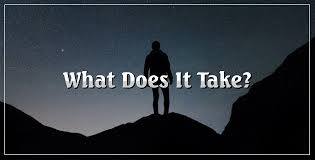 A few weeks ago I was asked what does it take to make it in this business? I replied by simply saying... "Your Soul". The person I said this to laughed but the laughter and smile quickly faded when They realized that it wasn't intended to be a joke unfortunately. Friendships severed, relationships with significant others fade away or end altogether, "missing" out on vacations, outings and not being able to spend time with the family. All of these things are symptoms of this great "Indiestry" that we have decided to become apart of. A lot of times people walk into this world blind with no sort of idea of what it will take to from you in order to succeed. Had most people knew that this would be the toll that would have to be paid I think a lot of people would have reconsidered. There's also others who became who they are today due to everything they've endured along the way. Struggle builds character and there's no quite struggle like the one to make it in this entertainment world. The rejection, The financial strain, The branding/re-branding phase, The aggravating clients/customers, it all hits us at some point in time or another... sometimes all at once.

So ask yourself this with everything I just said... Can you really handle surviving/thriving in this industry? The sleepless nights because you're up perfecting your craft knowing damn well you have school/work in the morning, missing that trip with your friends because you're coordinating or attending an event to promote your company, the constant arguments you will inevitably incur with your spouse/partner because you don't have time for them anymore and they don't trust you with so many women/men around. I've seen it all and lived through most and I can tell you that as cautious as you try to play this game there will always be hurdles like these and some even greater that you will have to encounter. Having the right people in your circle is important because they can help prepare you for all of these things (like the way this post is supposed to do). Coming in alone can be frightening but then again since you don't know what you're getting yourself into you don't realize this until some time later when you're already surpassed what originally frightened you. Being in this world will either destroy you or toughen you up. Sadly I've seen people I've been close with crumble due to not being able to handle the unknown that may come while moving through this world. I've also been proud to see the resiliency in a lot of my peers. I hope that with this post I didn't scare any of you off and that you will be among the people I spoke about that overcome the obstacles in this industry and not fall to the waste side.
Blackout The Rebel The VM Op Ed