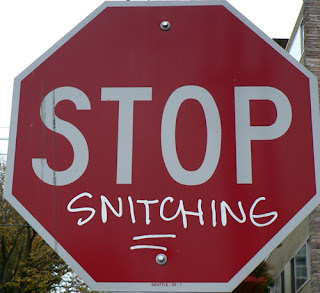 Happy New Year everyone. I hope you all had a safe and fun New Year's Eve. With the new year comes resolutions and reform. So as far as Hip-Hop goes I pray that one thing in particular stays in 2018 and that's snitch culture.

What is snitch culture you ask? Well snitch culture is the broadcasting and promoting of violent and or illegal activity through one's music. Sure it may sound good and it may further support his/her image of being a thug and "real" but it also helps the feds build a case on them. Case in point... Tekashi 69.

We are all aware of his case but what's sad is that he's not the first and I pray that he's the last but sadly I doubt it. We can even take it back to Bobby Shmurda. If you don't remember he literally snitched on himself and his team a total of 14 times on the track "Hot Nigga". That song was then used to connect him and his people in illegal activity which gave him the sentence he is still serving today.

Between then and now there's been various other artist who have snitched on themselves. As a matter of fact I did a #FBF (FuckBoy Friday) video via Instagram @darksideradio about a rapper who snitched on himself by saying he killed someone which then lead to the cops to investigate into what he was saying. Of course everything he said checked out and he was arrested for murder.

At what point do we stop glorifying this negative behavior and then get surprised and mad that our favorite rappers get incarcerated? I was told as a young man that "snitches get stitches". That saying should hold up for themselves as well. Gangsta rap really became big when NWA and Ice-T made songs like "Fuck The Police" and "Cop Killa". These songs explained how rough it is in the hood and was done from a reporter's perspective meaning they would see murder and drug activity being conducted in their hood. They never really said that it was them themselves that were doing it. As far as violence is concerned it was spoke about from a defensive perspective. That means that said that they have guns and prepared to kill someone because they understand how rough it is so they have to be prepared to defend themselves and those who they love. That's entirely different from the way murder and drugs is spoke about now in today's music.

Nowadays you have to rap about it because you're doing it but forget that the feds and police listen to Rap too. That's why I loved 50 Cent's "Heat" track off of his classic "Get Rich Or Die Tryin'" album. In that song he says "The D.A. can play this mutha fuckin tape in court... I'll kill you". I liked that part because he understands that he is incriminating himself with his lyrics but doesn't care.
I'm not saying that we need to do away with gangsta rap and be all peace and harmony but we have to smarten up for 2019. We have to stop snitching on ourselves and we as fans have to stop endorsing this type of behavior like it's cool because its not. What's sad is that people like Bobby Shmurda drop a song like "Hot Nigga" that helps get them locked up because they were trying to "keep it real" to a bunch of people that have already moved on and found someone else to like. Even when he was hot back then I still didn't know anyone who actually listened to his album so you can imagine who is really going to pay attention if he comes out today.

If you take nothing else from this post rappers its that you should think before you spit. Ask yourself is what I'm about to say capable of getting me or anyone I know locked up? If the answer is yes then either change the wording or do away with the lyrics altogether. As fans we have to demand better from our artist. There wouldn't be a market for this type of stuff if there wasn't a demand.
Blackout The Rebel