Your Title Is Everything 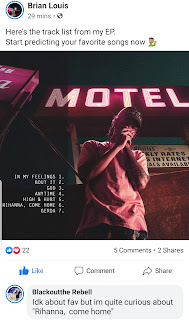 Before we get to hear your music or watch the video whats the first thing that must be explained? The title! Its what captivates us into knowing what you intend to do with your music. It prepares us for the proper mood and vibe to be in. Its our introduction into what you plan to occupy our time and minds with so a catchy title is very much needed.

Now what's catchy to some may not be to others and vice versa but it should be good enough to where some thought is put into how a person intends to go about this particular topic. A perfect example is someone who I've seen run around in this "indiestry" for some time now by the name of Kwoat aka Kwizzy. His project "Somewhere In My Feelings" drops tomorrow so he has decided to release his tracklist for the album. He then had people on his social media think  which song will be their favorite? He is very much in touch with how powerful a great title can be and posing this gives him feedback necessary to ponder on when creating more music in the future.

Does this mean be random and left field to get a reaction? Absolutely not. You do that and you could very well lose a fan or your audience because you now become too abstract to keep up with. Unless your songs are in fact something very deep and introspective I don't recommend doing that. Instead, Try to come up with something that sums the entire track up while giving intrigue to how it will be conveyed. Lets go over a few examples to give better clarity here.

Off the top of my head... Drakes "Tuscan Leather", Travis Scott's "Goosebumps", Jay-Z " #FuckWithMeYouKnowIGotIt" are just a few to name on a commercial scale. In the indies you have Michael Bostic and "A L.O.V.E. Story" album which is an acronym for Language Of Various Emotions. The song from Kwoat that inspired this post is titled "Rihanna, Come Home". As soon as I saw the tracklist my eyes immediately were drawn to this record 1. Because it was the longest title and 2. Because of who is mentioned in it. Rihanna is a big name so to see that Kwizzy wants her to come back home I think makes us all turn our heads in intrigue.

Artist, I hope this makes you think a little harder on the titles you give your records becuase it could mean the difference between someone becoming interested and just passing it by. The song could be a smash and they would have actually liked it had the title caught their attention in the beginning. A lot can be assumed and determined way before your music is even heard so in the words of J. Cole "Choose Wisely".
Blackout The Rebel