A Minute with Mainstream: Marc Madison of Pro Wrestling Post 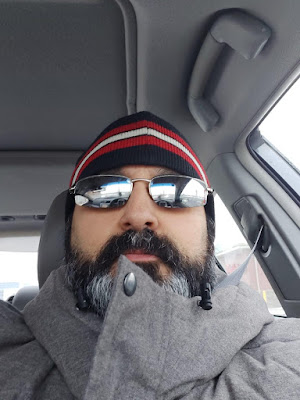 We live in a world where most people do not jump at opportunities, they hesitate, they stop themselves... as how my full-time boss says it: you cannot stop yourself from becoming great. For my feature today, nothing has stopped him, he's made it known that pro wrestling is his life... he just wants the world to know how great it is. Today, I return as DJ Mainstream and this is A Minute with Mainstream with Marc Madison, my boss at Pro Wrestling Post!

DJ Mainstream: Marc Madison how are you today?

Marc Madison: I'm fine. Busy and a little preoccupied with life and work and well, wrestling. How are you DJ?

I'm great, pretty much going through the same motions as yours. Speaking of wrestling, how long have you been a fan?

Good to hear. Thanks for asking. I'd like to say roughly 35 years? I've committed a long time to watch Wrestling I guess you could say.

A long time indeed. Which is a long time to suffer through all the story lines and drama that has occurred in wrestling. What was something that happened in wrestling that made you a fan?

Well it wasn't really even Wrestling but pop culture actually. Remember the show The A-Team? Well, I was a massive Mr. T fan and it was through my liking of BA Baracus that I followed this thing happening with some guy named Hulk Hogan? (laughs)

(laughs) Wow, well they say it usually takes one moment in time to fall in love with pro wrestling... yours happened to pity a fool and the other made us take our vitamins. But fast forward to now, you oversee Pro Wrestling Post, a elaborate wrestling news website and budding podcast. What made you go from just a fan to a journalist?

I've always loved to the idea of journalism. It's a responsibility that shouldn't be taken lightly. Often in today's day and age where the quick hit is needed its important to spread the truth. These are real people who's live are impacted by what you say. Eggs like words can't be fixed especially when they are broken.  My issue was being in an athlete's face after they lost a game saying how does it feel? I couldn't stomach doing that. Yes, it's part of the job but I'd rather not put myself in that place. I enjoy writing and hope that my respect for these men and women take precedence. If you check out the podcast I hope I maintain a sense of professionalism with each interview. Its important to maintain positive relationships that people will remember you by. I've had one bad experience but I took it and hopefully learned from it.

See, that was me in a nutshell with podcasting and even radio when it came to the music business. It's literal, but also have to give you a reason to get up every day as well. I always felt you need to report without sounding robotic. Even with the bad experience, you've still maintained a high level of delivering stories to the masses while still keeping that fandom with your work. What was one moment that hit you like "wow this is really what I do"?

Thank you! That's quite the compliment. I'm glad it comes across that way, DJ. I don't think I've had that moment. I think when Pro Wrestling Post is recognized as a reliable & quality site that both readers & wrestlers can rely on then at that time. But make no mistake, there is no I in Pro Wrestling Post, its a collaborative effort with my co-Administrator, Mark Blake to Editor Brandi Wagner and AEW Lead, Robbie Sutter as a driving force behind the sites content. Them along with all of our writer is where the site thrive and grow. I'm just a cog in the wheel.

No I in team as they say, which is how I built my website and also my station back in the day. It’s important to have a team effort, focused on one goal which made my job easier joining PWP. I will admit I love being able to write so writing about wrestling rather than just tweeting about it is always cool. Which brings up something interesting. You’ve been looking for more writers; what’s a quality you are looking for in finding a new member of our family?

Passion. If you aren't passionate about what you're covering, why do it? Also, a willingness to adjust & listen. We offer means to tweak things. Its always meant for the greater good.

Passion will get you very far in life when you are dedicated. And tweaks is the name of the game so to me, it seems like only the strong survive and very few will be welcomed into our inner circle… literally. But the one thing I’ve noticed about our crew is we are all open to all facets of wrestling across the board, sometimes even wanting to be bookers for some of the events we’ve seen. Have you ever wanted or were offered a chance to work with a wrestling company before?

Wrestling is bowl of ice cream waiting to have fans indulge in it various flavors. I'm far from an expert or elitist when it comes to Wrestling. I want to know & grow & continue to learn about Wrestling all the time. What I like about our crew is that we have wrestlers, managers, referees all writing for us. I don't think many can boast that. They have a voice who best to trust someone to share their thoughts but themselves. I haven't been offered a chance, that said I never inquired. I think part of me doesn't want to see the Wizard behind the curtain. Keep the mystique sort of speak.

I never realized it until you detailed it how multi-talented our group is but that also a testament to the way the boot site has hit record numbers over the past few months. As far as the mat mystique, keep it that way, trust me (laughs). But as far as I’ve seen your acumen is built on detail and precision with reporting. For those looking to start their own news reporting website, non-wresting driven, what do you suggest where they start?

Reach out to those you trust. Ask them for feedback, direction and ideas as to how to make the your site grow. I'd suggest looking into SEO expertise to aid your sites growth. You have to decide what it is people want and deliver that without compromising your vision completely. Pro Wrestling Post was built on Wrestling interviews.

Where were you when I first started Voiceless Music? I needed that advice (laughs). But all jokes aside structure is important without it there’s no stability. As we wind down I do have two more questions. One, we are a music driven website so I have to ask: what’s your favorite theme/entrance song of all time?

Oh geez. That's a tough one but I'm going to go with my favorite all-time wrestlers theme that coincidentally my favorite basketball entrance theme too strangely enough. Before I say it. I'm going to leave you to take a guess.

Click here to listen to Allan Parsons Project's "Sirius"; used for the Chicago Bulls theme since the Jordan Era

Wow. You know what my history records mentally has never traveled back to a entrance of The Dragon but now I’ll scour the interwebs for that. Ok, I gotta ask a very common question with my own twist. What would be your dream match? But you also have to state In what company and for what title?

That's a tough question because I don't think about dream matchups. There are so many ways that I approach it. I feel like Ross from Friends when he had to make his list of any 10 women he could be with. (laughs)

Technically, I'd like to see what Bruno Sammartino would do against Zack Sabre Jr or Will Ospreay against Ricky Steamboat. I think I'd have an originator face an innovator of that same ilk, if that makes any sense. What would Karl Gotch do against a Pete Dunne? Goldust against Adrian Street? That sort of idea.

As for companies something neither ever a part of so Sammartino in NWA. Gotch/Dunne in NJPW. Ospreay/Steamboat in AEW. Goldust/Street in AWA. Dreaming of what if hurts especially when in most cases it'll never be. I can't dream of what could have been, I need to think of what could still be That was a tough question for me. Haha, not use to being put on the spot like that. Haha

Sammartino and Sabre with that classic storytelling style of NWA. A epic hard hitting affair between Gotch & Dunne in NJPW. Osprey and Steamboat with that fast , in your face style of AEW and a clash of flamboyance between Goldust and Street in AWA.... my man I think you will break the Internet with your choices.

(laughs) You think so? I'm no Booker.

So as we close up here, I wanna thank you for the opportunity for being able to write for Pro Wrestling Post and of course the chance to be apart of something special. Any last words for, as I call them, the PWP Army?

Thank you to anyone that's visited ProWrestlingPost.com. Please check us out for your daily news, reviews, previews, original content & interviews.

And thank you for taking the time again for the interview.

It was my pleasure. Thanks for having me.