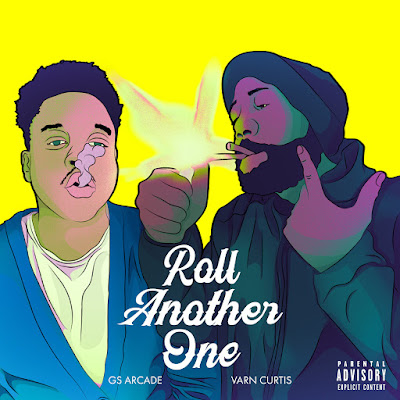 Remember that feeling when you got Iron Man & XO Man-O-War in a video game together? Old head shit we know. But this, this is that feeling.
Introducing lo-fi beats extraordinaire OS Arcade and re-introducing Varn Curtis, as together they drop off Roll Another One for your listening pleasure.
Fresh off his first effort, Bongs Blunts & Bitches, Varn has continued to tap in to what we call ‘loud pack rap’ which lines up  like a fresh Bluntville with OS Arcade’s sound.  Let’s start with this “Intro”. So the world knows, recreational marijuana is legal in New York City. Cases closed.
Now that we got the Raw papers out the pack, we continue to roll up with the basic but necessary anthem “DopeMan” as Varn reaches into his inner Afroman with a simple ode to... well, himself. And while we enjoyed the Jo$e Zavala featured, auto tuned laced “West End” and the clever “Say No To Drugs”, we cannot end this review without highlighting the dubs for $30 aka #3 on the EP.
While we are all still rocked by the loss of Yonkers legend and Hip-Hop Hall of famer, DMX, the Queens MC gives us a little “What These Bitches Want” on this Dark Man-flavored “F****d’em All” as he lists his female... achievements. It’s funny, it’s entertaining and it’s crafty all rolled in 2:56.
While the Southside Queens artist once again delivers on kush infused rhymes laced with sour diesel instrumentals from Arcade, we can only expect more bud fresh from Varn coming. Enjoy this dime in the meantime.
- Mainstream
Varn Curtis & OS Arcade - Roll Another One (Album Review)
Apple | Spotify
Albums/EP East Coast Rap Varn Curtis